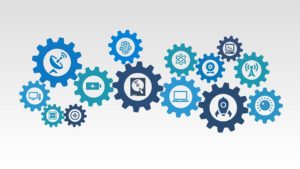 OH boy……here we go…. Initial Jobless Claims come in at 376k, Continuing Claims 3.5 million, Real Avg Weekly Earnings supposedly fall by 2.8% and Core CPI ‘beats the expectation’ (which should have been a negative) coming in at a full 5% – well above last month’s read and above the current expectation of 4.7%!  The headline number did cause a stir in the moments after its publication, but then before the opening bell rang – futures which had been down suddenly turned UP!  Buyers chomping at the bit to get in quick before they missed ‘the trade’…. But wait…. what did I miss?  Wasn’t the market supposed to go DOWN on a stronger number?  Doesn’t a stronger number suggest that inflation is rearing its ugly head, Won’t the FED be forced to move faster?  Welllllllllll, Yes and No!  How do you like that- riding both sides of the fence?

You see – while the CPI number was strong – it was full of fluff…. When you take out Food and Energy – (1.2%) that leaves you with 3.8% but then – suddenly – you have to take out ‘used cars’ – which is an exploding ‘transitory’ cost and that was another 1.5% – which then leaves you with a CPI of 2.3%!  See how that works?  So now – the ‘adjusted CPI which was expected to be 3.5% is really only 2.3%!  I love how math works – it’s like science – it is very exact…and so it is what it is…and the assumption is that with CPI weaker than expected the FED will not be forced to move faster (think taper), which does not mean they won’t move, it just means that the expected move on tapering (announcement to come in August at the annual Jackson Hole boondoggle)  most likely remains on schedule to begin in late 2021/early 2022.

And so – investors celebrated!  Stocks went higher as the algo’s went all in – Tech, Disruptive Tech and other high growth names taking the lead while the smids – a.k.a. the Russell – (small/mid-cap) stocks got kicked in the stomach…. which is not surprising – as investors/asset managers move money around.  The Russell is up 17% ytd and was kissing its highs – so investors used some of those names as an ATM to redeploy money across sectors that have been lagging…. Healthcare – XLV +1.7% being just one of those sectors.

And then the street gets to react as Jay Powell gets full support of his narrative from two of the FED’s friends…. …. after the number came out – Blackrock’s Ricky Rieder and Goldman’s Stevey Schurr – both came out in support of the FED saying that there is nothing to worry about, forget the surging prices you see everywhere, they are temporary and will soon retreat!  Deutsche Bank on the other hand is breaking away from the crowd warning of another ‘potential crisis’ coming saying

“The consequence of delay will be a greater disruption of economic and financial activity than would otherwise be the case when the FED does finally act.”

In any event – that is what makes a market both buyers and sellers, differing opinions and different outlooks.

There really is not any new eco data today to drive markets…. We will get the U of Michigan 1 yr. inflation expectation of 4.74% and the 5 – 10 yr. rate of 3%.  But I do not suspect that this will change the narrative at all….so we wait until next week when the FED holds its June FOMC (Federal Open Market Committee) meeting.

Down in DC – we are hearing that that Bi-Partisan group of legislators did in fact arrive at a new bi-partisan infrastructure plan – now all they need to do is garner support for it.  The $974 billion plan would be fully paid for without any tax increases – leaving it unclear of how exactly it will be paid for – and the jury is still out on whether the Democrats will support it – as many in that party are not convinced it is ‘large enough’ and that it ‘spends enough’.  More to come.

This morning – we are seeing that 401K provider – ForUsAll Inc – has entered into an agreement with Coinbase Global to begin to offer a ‘crypto’ option among all the funds that participants can choose from. The option would allow participants to allocate up to 5% of their contributions to Bitcoin, Ethereum, Litecoin and others…. Not sure if Doggey Coin or Safemoon are included…  ForUsAll – is a 401K administrator that offers a menu of low-cost mutual funds and with just $1.7 billion in retirement plan assets represents a fraction of the $22 trillion retirement market – but they are the first to offer and embrace crypto as an investable asset within retirement plans.

US futures continue to dance to the music…Dow futures are up 80, S&P’s up 5, Nasdaq up 4 and the Russell is ahead by 8 pts.  Much of the action today will be around yesterday’s CPI report with everyone coming out defending the FED and their position concerning inflationary pressures – Because if you say it enough, it must be true.

It is the end of the week and next week – is chock full of economic data…. In addition to the FOMC meeting we will get Retail sales, Empire Manufacturing, PPI – which is the Producer Price Index, Capacity Utilization, Industrial Production, Housing Starts, Building Permits and the Philly Fed Survey.

Oil! Trading at $70.53/barrel as demand surges…and the acceleration is expected to continue into the second half of the year as the world wakes up and ‘burns through’ supply at a quickened pace.  OPEC said that it expects crude inventories to fall below the 5-year average by the fall further supporting rising price targets for WTI.  We are in new territory – have not seen 70 oils since October 2018 and targets range from $75 – $100 barrel in the coming 6 months….

Bitcoin is trading at $37k, Ethereum is trading at $2,500 while Doggey Coin is at 0.32 cts.
The S&P closed at 4239 – A new high!  And with futures up again this morning and European markets higher, expect it to test yesterday’s high at 4250 before tiring…. The formal kick off of the G7 starts today and will play out all weekend  – expect to hear more.  Stay the course – stick to the plan, remain vigilant.

This was always considered a peasant dish – although you would never know it by the prices on the menu – today it is featured as a ‘specialty dish’ – so pay attention and you can make this classic Sicilian dish your own….

It is a great healthy vegetarian dish and you can make it GF (gluten free) so that all can enjoy.  it is full of protein, fiber and low in calories.

In a saucepan – Olive oil – 2 tblspoons – heat.  Add 1 clove of crush garlic,  finely chopped (1) onion, (2) celery stalks  and (2) Lg carrots – sauté until tender – about 15 min or so.  When soft add 1 can of cannelloni beans, one can of crushed plum tomatoes.  S&P, and 3 cans of water.  Bring to a boil…..then reduce heat to simmer and cook uncovered for 20 mins….you may have to add a bit more water to keep it a bit soupy.