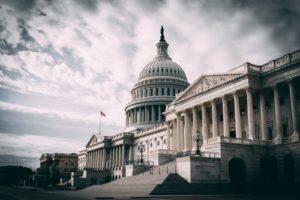 The Biden stimulus plan… word was that it was going to be in the trillions – and bingo – it is $1.9 trillion (on top of the recent $900 bill and then the promise of even more by the end of March that is sure to provide at least another $ trillion – bringing the total package to closer to $4 trillion by the time he gets done with it… and that is before Bernie or the others from the ‘progressive’ wing get their say… Oh, and the vaccine? We know that too… as of today more than 15 million Americans have been vaccinated with 900,000 more vaccinations happening every day… as the supply chains deliver the meds around the country… and hospitalizations continue to decline, and Trump? Well, he got impeached by the House and now Nancy will send it onto the Senate who will probably deal with it after the Biden inauguration on Wednesday.

And earnings? Yup – so far they are all crushing it… BLK, JPM, C, WFC, yet, they all sold off on the news… will that be the plan going forward? Or were they weak, because the broader market was weak? We’ll get more on that today… with GS, BAC, NFLX and HAL all due.

On the economic front – we have rising 10 yr yields which will cause some to reconsider and re-allocate funds – a conversation we have been discussing for a couple of weeks now and we got a very weak Retail Sales Report for December which also followed a weak November (although Black Friday and Cyber Monday sales broke all kinds of records) and that added to the negative tone for the day once again putting the spotlight squarely on the havoc wreaked by the coronavirus and the need for this massive stimulus package… although it will be interesting to see how these companies report in the next few weeks… because their stock action is not reflecting weakness at all – suggesting that all these moves up due to the anticipation of the ‘recovery trade’ vs consumers spending. TGT up 26%, DDS + 101%, JWN up 216%, M + 140%, ETSY + 77% and the XRT (Retail ETF) up 48% – all since October!  It will be interesting though when they all start to report – watch online sales, contactless sales, vs. in store sales…

In any event – we all know that the surge higher in the markets has been due to a couple of things – 1. The election and the finality of it, 2. The promise of both massive stimulus combined with continued low interest rates, 3. The 3 available vaccines that are now circulating around the world with a 4th due (JNJ) any day now, 4. The Recovery trade and the excitement of a return to normal… But keeping up this momentum will be tough – because we are a bit extended and there are some potholes ahead…

With congress evenly split – there will need to be more compromise(unless everyone sticks to and votes the party line) and while compromise is good, it may not produce exactly what the market is anticipating… Additionally – we have slowly rising 10 yr yields… and while they are still relatively low at 1.107% – many are now beginning to wonder at what point will rising rates put pressure on stocks? – 1.3%?  1.5%? And then we have the inflation monster – and while it is not an issue today – many on the street are now preparing for a rise in inflation beginning in the 2nd half of the year… and then what does that look like? 2%, 3%? Which then leaves us to wonder what the FED will do then… and while they tell us that they are willing to let it run hot for a bit – defining ‘hot’ will be the next $64k question… just sayin’

Which is why we are seeing the growth to value trade remain alive and well… Which doesn’t mean get rid of growth at all, it just means that as the tone changes in the economy, then investors must be aware as well… the bet is that 2021 will value stocks surge – and so far this year, value (SPYV) is up 2.3% while growth (SPYG) is down 1.19%.

In any event – yesterday was a holiday in the US so the markets were closed – and this morning we are seeing futures rise (taking back the Friday losses) as the country looks forward to the peaceful transfer of power tomorrow and Janet Yellen appears on the hill today to tell the Senate finance committee that the US gov’t MUST ACT BIG with the next round of the relief package saying that:

‘the US economy must be rebuilt so that it creates more prosperity for more people and ensures that American workers can compete in an increasingly competitive global economy.’

We are now fully engaged in earnings – and today will bring us BAC, GS, HAL, SCHW, NFLX along with some others… there is no real economic data today but it does pick up later in the week with Housing Starts, Philly Fed, Markit Manufacturing PMI, Markit Services PMI, Existing Home Sales, Chicago Fed Survey, etc… But this will all be overshadowed tomorrow by the inauguration which officially begins at 11 am…

European markets are mixed… not surging nor collapsing… as investors there also await more earnings, the inauguration of President Biden and the expected comments from Janet Yellen who will re-iterate that the country is headed for a major recession unless ‘they act big’ saying that the benefits will far outweigh the costs… there are no major earnings reports today in Europe but Germany is expected to report on economic sentiment. Over the weekend – Germany’s CDU party picked Armin Laschet as its new leader possibly replacing Angie Merkel as Chancellor during the elections later this year (this was expected, so it is not new news). At 6 am – the FTSE +0.16%, CAC 40 +0.001%, DAX +0.20%, EUROSTOXX +0.11%, SPAIN -0.25% and ITALY +0.28%.

OIL which got slammed on Friday (covid concerns)… is rebounding a bit up 11 cts at $52.50… holding its own… the IEA (Int’l Energy Admin) revised demand a bit lower due to continued virus concerns… the adjustment was negligible so no real impact on prices. I have been saying that $55 would represent resistance for oil and last week we did trade as high as $54 before pulling back. My guess is that we remain in the $45/$55 range until we get more clarity on the global economy.

Bitcoin tested near $40k again last week and found resistance – today it is trading +$863 at $37,000. The sense is that $40k appears to be a level that it needs to not only retest, but retake and soon, if not – then there are some that suggest that the Bitcoin trade is so overcrowded that there could be some ‘unrest’ causing it to come back down and test trendline support at $27,500 – which would represent a pullback of about 30%… after a 12 month surge that took it up 375% – In any event – the haters will try to talk it down while the lovers will continue to predict $500k prices by year end… so if you must – hold your nose and jump in.

The S&P closed at 3768 – down 28 pts on Friday… and this after we got confirmation of the Biden plan… and the start of earnings season.  With the plan now front and center and earnings in full swing – let’s see what investors/traders and algo’s do next.  As I said, so much of this has already been priced into the markets so a pullback to the trendline (3650) should not surprise anyone. (FYI that would be a 3.5% retreat – hardly anything to write home about). Earnings season is expected to produce a 75%-80% beat rate (trend) and like I said – the juice will come from the guidance. JPM along with BLK and WFC and C all reported and beat the numbers – yet all of them sold off as the trader types took money off the table after sending them higher in the months prior. Expect more of the same.

So stick to the plan, create a well balance and defined portfolio… trim and rebalance where necessary, call your advisor and focus forward… 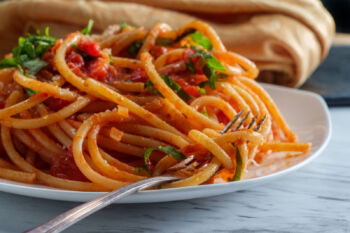 The Red Pepper Sauce comes from the Lombardy region and is one of the 20 regions of Italy… its capital is Milan – Fashion and Business capital of the country… 1/6 of the population lives here and about 20% of the country’s GDP is produced here… making this one of the richest regions in the country as well as in Europe. It is home to Lake Como, Lake Garda and Lake Maggiore. Spectacular locations… and ones that should be on everyone’s bucket list.

Bring a pot of salted water to a rolling boil.

Cook the pasta al dente – maybe 8 mins… strain and reserve a mugful of water. Toss the pasta into the sauté pan and turn heat to med – mix well – adding in half of the reserved mug of water.
Now add the fresh basil – some hot red pepper (opt) and plenty of cheese. Toss and serve.