The electoral college is at 224 (Biden) to 213 (Trump) – an almost statistical tie… but with AZ, MI & WI leaning towards Biden, PA and GA leaning towards Trump – it is GAME ON! At the moment – both candidates HAVE a path to 270 electoral college votes and the ‘keys to the Kingdom’. What is really surprising in all of this is that the Blue Wave or Blue Tsunami that was expected – did not happen… Right now – it appears that the GOP has held onto the US Senate – Mitchy McConnell is still the man in charge – so that statement of ‘substantial change’ that the far left was touting is in fact not the case… The majority of the country voted AGAINST the far left ‘progressive’ policies of Bernie and Lizzy… It’s time to allow the democratic process to play out and accept the results… It could be hours or days still until we get the final tally in from those swing states that we identified… but the process was not fraudulent, it was not rigged, it was as it should have been – and the results will be what they will be.

At 2 am – Joey came out and said that he is confident that he can pull this out, that he is optimistic about the outcome while at 2:30 am – Trump comes out and says ‘he won’ (let’s be clear – he has not won yet) and indicates that if he is not happy “We’ll be going to the Supreme Court, we all want voting to stop” and that is NOT helpful at all… so that contested fight that we have been discussing for months now is in fact on our doorstep… Let’s also be clear – if it appears that Trump does pull it out – we can expect a challenge from the Dems – and rightly so – the vote is close – it is NOT definitive by any definition of the word… in the end the CLEAR mandate is the fact that the majority of Americans are in the middle – not far left nor far right.

While some would argue it meant a Trump win, others were pointing to a Biden win – all rationalizing the surge to fit their affiliation… And while that’s all good – I was thinking that all it meant was that whoever won – would win by a significant margin… and that is not how it played out – but in retrospect – you can NOW argue that the surge suggested that we would have a split gov’t – and that means gridlock for the most part and that is usually good for stocks and the markets – as nothing too far left or too far right will become the law of the land.

Industrials XLI + 2.9%, Basic Materials XHB + 2.04%, Tech XLK +1.8% & Retail XRT +2.5% all leading the way out… suggesting that a fiscal stimulus plan is coming and it will be substantial enough, that cap gains taxes and personal taxes may NOT be going up (thus the rush back into tech) and retail enjoying a surge as families will not be subject to higher taxes – leaving more in their pockets to spend and support the economy. Again – depending on who you talk to – will depend on how they rationalize the results… so as I along with so many others have been saying – the chaos that was created in this election is short term – it does not price stocks in the long term – so trying to play the election with your portfolio is NEVER a good idea… and that could not be more true than right now.

Let’s be clear – while some will say that there was NOT a clear mandate (maybe there was…)  – both the far left and the far right lost last night – and that is good… the majority of the country is in the middle (and that is the clear mandate)  – Democracy did win – and it’s time to heal, it’s time come together and do what is right for the country.

Overnight – futures were all over the place – falling  by nearly 500 points before finding stability and rallying back hard… at 6:30 am US futures are mixed… the Dow is off by 63 pts, the S&P is up 12 pts, the Nasdaq is ahead by 245 pts and the Russell is off by 25 pts. The analysis will continue all day and maybe we will get a result before the day is out and maybe not and if the vote does come down to a small margin in those states then an automatic recount is initiated, but if not – the candidates have to wait one week before they can ask for a recount. I expect someone is going to ask for a recount, so this is not over yet… ‘the fat lady (think the Opera) is NOT singing’ … but she might be warming up…

Look – we can now move on and focus on the fundamentals and longer term fiscal and monetary policy and that’s the best part of this story… In the end – it is the economy, jobs and security that were the most important factors in the race… it was not covid19 – and while covid19 is still an issue – it was not the deciding factor for the majority of Americans as so many now expect a vaccine sooner rather than later. In a Biden WH – absent another new crisis – I would not expect any major tax policies initiatives at all due to a GOP Senate – so it will come down to compromise – as it should.

The S&P closed at 3369 yesterday after trading as high as 3389 – just below resistance at 3400… This morning’s results do leave some room for reconsideration of the latest move – expect tech to surge again as a rise in Capital gains taxes is moot and calls to break them up maybe be losing momentum… It does appear this will be a contested election or maybe not,  and that  means a bit more uncertainty and you know what that means… but it might just take a couple of days to figure it out… My guess now is that we are in the 3300/3400 range until we get more clarity… Stick to the plan… God Bless America. 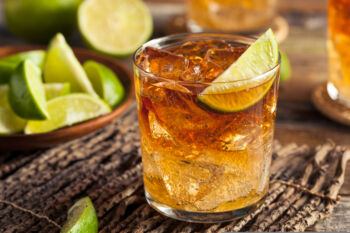 The Dark and Stormy

A vintage WWI era drink that might just be making a comeback!

For this you need: 4 oz of Ginger Beer, 2 oz of Dark Rum, ½ oz of fresh lime juice and a lime wedge.

Fill your glass with ice, then add the ginger beer, lime juice and then the rum (in that order). Garnish with a lime wedge.