“They just want money for the President to spend money on who knows what? There is no stand-alone bill without a bigger bill”.

So, as any thoughts of a piecemeal stimulus plan were dashed… stocks sold off – and not only is there no deal in sight but there is also no resolution to the standoff between the Dems and the WH – no matter that the sirens are starting to blast a warning signal of a weakening economy. As the market started to fall – Trump re-iterated his comments that is willing to sign those piecemeal bills (if she sends them) and she qualified her statements saying that she has confidence in the Treasury Secretary, that she believes he does want to make a broader deal but the WH still hasn’t provided a counteroffer to her $2.2 trillion package… (which is not really true – Mnuchin has countered with a $1.6 trillion deal) – but she is not happy with that counter – so I guess in her mind they didn’t counter… They are also trying to craft language that would prevent the administration’s ability to divert testing and treatment funds to other projects. In the end – she tells us that she is ‘always optimistic’. And the truth is – why should there be a piecemeal plan vs. a broad plan… how do you pick and choose among industries – who lives and who dies?

And so stocks stabilized at the lows of 3428… which is interesting – because on Wednesday 3428 was the high and represented resistance – so as stocks surged on the opening yesterday (on stimulus hopes and therapeutic advances) and blasted up and thru 3428 – that level then became support vs resistance and performed as expected – it became a level where buyers stepped in – when the market backed off – and stopped the bleed. By the end of the day the Dow added 122 pts or 0.43%, the S&P was up 28 pts or 0.8%, the Nasdaq gained 56 pts or 0.5% and the Russell was ahead by 17 pts or 1.09%.

Side note – Russell small/mid-caps have been the surprise – up 15% since late September… the IWM – small/cap ETF – saw over $1 billion of inflow on Wednesday… suggesting that investors are finding value and future opportunity in this sector of the market as it has clearly underperformed and is still negative on the year (-2.3%).

2 – They are buying into the fact that they believe a Biden win is coming (and that it will be good for the economy) along with a possible Democratic sweep – which is now the talk all over the street – led by Goldman – and which the polls suggest is an increasing possibility.

In any event – take a look at the House bill – Let’s be honest – there is some ‘pork’ in there (thus today’s recipe)… but there is also a deal in there… split the difference and make it happen at $1.9 trillion and be done with it.

Overnight – Chinese stocks surged – up 2.08% after being closed all week for holidays… the Caixin/Markit Services PMI for September coming in at 54.8 – solidly above the 50 level – indicating a solid expansion. Japan and Hong Kong ended the day lower while the ASX went out flat.

In Europe – markets are higher in mid-morning trading. Investor focus is keenly on DC and the stimulus talks… the UK reports that their economy grew by 2.1% – well below the expectation of 4.6% as they country deals with a slowing recovery. Surging virus cases in Spain continue to be a concern as the country considers declaring a state of emergency to control the latest outbreak. France and the UK also raising the warning flag as cases surge in those countries as well. The London Stock Exchange announced that they are selling “La Borsa Italiana” to Euronext for $5.1 billion. As of 6:30 am – the FTSE +0.68%, CAC 40 + 0.4%, DAX -0.02%, EUROSTOXX +0.17%, SPAIN -0.39% and ITALY -0.26%.

And US futures are up again this morning – Dow + 130 pts, the S&P is up 15, the Nasdaq is up 38 and the Russell is up 20. (again, outperforming on a percentage basis). And yes – it is talk of a stimulus deal that continues to dominate the news and drive the action – which only tells you how desperate investors are for Congress to do something real… Talk of a cancelled Presidential ‘virtual’ debate next week – simmering on the back burner with Trump saying ‘no way’ while Joey says “I’ll be there with or without him”. Trump also is planning on hosting a rally in Florida on Saturday as his Dr apparently gives him a pass.

There is no real eco data today that will drive the markets… Remember – earnings season officially kicks off next week – with the banks the first to walk down the runway… JPM and C due out on Tuesday the 13th. Also due out is BLK, JNJ and FAST. Remember – numbers have been adjusted up for the 3Q (which I think is mostly priced in) but are now coming down for the 4th Q and into next year as the lack of a stimulus bill begins to weigh on the economy. Forward guidance (as always) is the real story – Remember – the earnings have already happened – they are history – in the end – I expect the usual – 75% or the reports will beat… that’s just the way it is… but between the election – which happens towards the end of the season and the stimulus talks – expect volatility to increase… and while the idea of a contested election is fading – there is still plenty of room for volatility.

Oil – has quietly rallied back trading at $40.77 this morning down 41 cts from yesterday. A look at the chart shows you that all 3 trendlines are about to intersect… with the 50 & 200 dma trending down – while the 100 dma is trending up… the range? $40.27/$41.12… so we are smack in the middle – it has to break out or break down any day now… overnight we saw it did break up and thru resistance before backing off. A weaker dollar and Prospects of tighter supplies due to the strike in Norway as well as the damage that Hurricane Delta is about to inflict on the gulf coast contributing to the move. Sit tight…

Gold is also rallying +$28 at $1922/oz – on the back of the weaker dollar and the idea that a stimulus plan is on the horizon. We remain in the $1890/$1950 range. Remember – gold is used a hedge against inflation and currency weakness – and it is up nearly 26% ytd… I expect gold to rally as market volatility increases going into the election and year end. And a Biden win and a democratic sweep will surely bring another massive stimulus project early in the new year.

The S&P closed at 3446 and it feels like it wants to end the week higher… We are now above the September highs of 3430 with a pathway towards the late August highs of 3580-ish. The algo’s may take us there over the next weeks – as they blindly push stocks higher… and this is the concern… because what has really changed? Not a lot… in fact – US cities are once again considering shutting down due to increases in the virus, and the election is still a wild card. The only thing that appears to be making progress is therapeutics for the virus – which is good, but again I think the market has priced most of that in… so Caveat Emptor (Buyer Beware). Talk to your advisor – tweak your plan if you are nervous… be bit more defensive and re-balance based on the most recent moves… 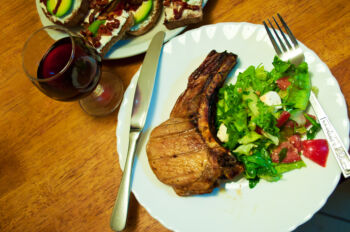 This is an easy recipe, takes a little amount of time. For this you need:

4 pork chops on the bone – about 1 inch thick… you can use lean boneless – but why? s&p, bacon drippings (you can also just brown them in olive oil if you prefer – but the bacon fat does give it a whole different flavor) , flour, chicken broth, dry white wine, sliced sautéed onion…..

In medium sauté pan, sear the pork chops slowly on both sides in hot bacon fat. Remove chops from pan.

Next – add some flour to the bacon fat – making sure to stir constantly so that you avoid the lumps… do not overdo it… just enough to thicken it… Really no more than 1 tsp… at most.

Put the chops back in – flip so that you get both sides covered… now add in the chicken broth and white wine… equal parts of each. Layer the sautéed onion on top – season again with s&p and cover… allow to simmer for 30 mins or so… depending on thickness…

Prepare a green vegetable with this – maybe broccolini – sautéed in garlic and oil season with s&p. Make a large mixed salad with tomatoes, red onions, croutons, cucumbers. Squeeze a fresh lemon – season with s&p, oregano… toss with balsamic and a splash of olive oil…