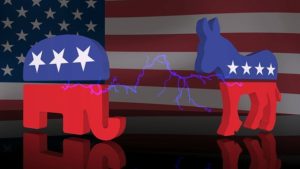 Stocks fell on Thursday…. continued mixed earnings, new corona virus lockdowns across Europe, concerns rising here at home and more angst surrounding the election. On top of that we had the dueling ‘town halls’ to look forward to…… speculation running rampant over what the latest polls tell us….and what they tell us is that Joey still maintains an 11% lead over Donny – and while those ‘swing states’ appear to be bit closer – Joey is still pulling ahead.

The European markets – which ended the day near their lows – falling better than 2% across the board only put pressure on investor psyche. US futures were showing 1+% losses on the opening – casting a pall over the tone…. The negativity causing a Risk Off mentality.

Weaker economic data did not help – the Empire State Manufacturing weaker, Initial Jobless Claims rising nearly piercing 900k… and Stevey Mnuchin telling us that the probability of another stimulus deal was very low….not impossible, but not likely……and all of this caused the algo’s to hit the sell button sending stocks lower in early trading…..Then we got a handful of mixed earnings that seemed to help stop the bleed. Around 12:30 ish….there was a rumor that Nancy was feeling the pressure and picked up the phone to call Stevey – to try and re-start the discussion – which then caused the markets to stabilize and move higher into the end of the day. In the end – The back and forth on all these issues is causing markets to be optimistic and then pessimistic all in the same day and that is taking its toll.

The action of late reflects the fact that investors are reluctant to make any real large significant bets before the election – now that the idea of a contested election is being widely discussed again. Look – while Biden is in the lead now (as Hillary was in 2016) the idea that we could get a 2020 surprise is causing some to rethink their positions. It’s ok to be in a holding pattern – because the election results will be the next real driver. As many consider what a Democratic sweep means – Some think it means a swift correction…..so they want to sit tight and hold their cash on the side to take advantage of the coming sale….and that makes sense – why would you pay up for stocks if you think that a sale is coming?

Now if the polls turn out to be wrong – and Trump wins – the next consideration is – will the GOP hold the senate? If they do – then markets will rally. If they don’t’ then markets will retreat as the Dems control both houses in Congress. Now if Biden wins but the GOP holds the senate then the market stabilizes and rallies…because it will be a ‘gridlocked’ gov’t for at least 2 more years. In any event – expect the drama to be driven by what is happening in 3 weeks. We will get one more Presidential debate next Thursday – at Belmont University in Nashville, TN. In the end – the market just wants clarity – and if the election proves inconclusive (contested) then expect the volatility to soar…and that is what the VIX futures continue to suggest.

This morning we wake up and find that European markets are all a bit higher…..makes sense after that beating they took yesterday…..the concerns over rising infection rates appearing to be ‘less of an issue’ today. That is – until it isn’t. A bunch of positive earnings reports are causing investors to focus on those reports. What is true there as well is what are these companies saying about the future? The European Union is advising the UK to ‘back down’ from their stance over BREXIT or face ‘significant trade disruptions’ at the end of the year but that does not appear to be a concern for investors right now. Does that suggest that investors expect PM Bojo to come to the table and renegotiate? Maybe…. but let’s see. At 6:30 am – the FTSE +1.1%, CAC 40 + 1.6%, DAX + 0.93%, EUROSTOXX +1.15%, SPAIN +0.23% and ITALY + 0.65%.

US futures are slightly higher. Dow +56 pts, the S&P +7 pts, the Nasdaq +25 pts, and the Russell are up 9 pts. With a new stimulus plan remaining elusive and cities across Europe in various stages of lockdown mode while US cities remain on high alert concerns of more damage to an already fragile global economy remain real and are building. Last night – Trump announced that he and the GOP are ready to sign – but that she is the one holding it up…. the market remains $1.8 tril/$2.3 trill. In the end – you must ask – What is Nancy thinking? Is she betting on a Democratic sweep? Absolutely. The risk she runs is what if that doesn’t happen? And that is a risk….so sit tight to see how this end.

Positive earnings surprises can only do so much for the broader market psyche. The finality of the election – if we get one – is the only thing that can bring clarity to the next move. Once we put this behind us – then the focus will return to the fundamentals….and expect every analysts/strategist to define the new economy based on what the political landscape looks like. Remembering that a gridlocked executive branch will produce nothing….and the status quo – will remain.

Economic data today includes: Retail Sales exp of +0.8%, Ex autos and gas of +0.5%. Industrial Production of +0.5%, Capacity Utilization of 71.8% – well below the 80% level that would suggest building underlying inflation…., Business Inventories of +0.4%.

The S&P closed at 3483 after trading as low as 3440……. this morning’s action suggests further consolidation. Expect the media to dissect the Town Hall events from last night. Expect them to award the win to Joey……because they are already saying that Donny was a bit confrontational…and Joey was in control. When Georgey Stephanopoulos asked Joey about packing the court, he said he would announce his stance prior to the election – he qualified it by saying his stance will depend on ‘what they do’. And when Samantha Guthrie asked Donny if he would accept a peaceful transition – he said he would if the election was honest. Oh boy.

Chicken Cacciatore – literally means Chicken prepared hunter style (cacciatore). In Italian – the cacciatore is the hunter and the hunter prepared his meals with braised chicken (or rabbit), garlic, tomatoes, onions, bell peppers, mushrooms, peas seasoned with oregano, basil, wine, and S&P. You would then cook the chicken in this sauce and serve it over Fusilli. (***you can also make veal cacciatore by substituting the chicken for veal stew pieces**)

Start by sautéing crushed garlic in olive oil…add the seasoned chicken pieces (s&p) – use thighs, and legs as they are juicy and tender – Breasts tend to be dry and never fall off the bone the way the dark meat does. Just brown the chicken pieces – no need to cook all the way through as it will cook in the sauce. Once you have browned the meat – remove and place on a platter. Next add sliced onions, and bell peppers – use 2 lg onions and 1 green and 1 red bell pepper – if you like the orange/yellow ones then feel free to use that also. Sauté the onion and peppers and until soft – about 10 mins…. season with s&p. Remove from the pot – now add two cans of kitchen ready crushed tomatoes – not puree – just crushed tomatoes. Then add one can of water (and 1 cup of red wine – optional). Season with s&p, oregano, and fresh basil…bring to a boil and then turn heat down to simmer. Add back the chicken, onions & peppers. Now add one can of sliced mushrooms (draining the water first) and one bag of frozen peas. Let simmer for 45 mins – stirring occasionally. At this point it is done – but like I said – the longer it simmers the better it is and if you let it cool and refrigerate until the next day – it is like you died and went to heaven. You can’t make this up….
When ready – bring a pot of salted water to a rolling boil and add the Fusilli…cook for 8 / 10 mins or until aldente. Drain – reserving a mugful of pasta water – and return to pot adding back about 1/4 of a cup of the pasta water to moisten….let it sit for a min and absorb the water…now add 3 or 4 ladles of sauce and toss. Add two handfuls of grated cheese – Locatelli Romano works great – toss again and serve. You can serve with the chicken or you can serve the chicken on a separate platter in the center of the table. This meal works well with a nice Chianti – remember this is a meal prepared by the hunter – he is a simple man so the wine should reflect his simplicity. Does it get any better?