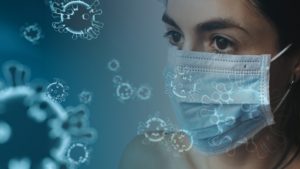 Retail sales blew the roof off the house – expectations of +8.4% were dwarfed when the gov’t reported sales were up 17.7%! Sales ex-autos and gas were up 12.4% vs. the expected +5.1%… and this sent stocks even higher in early trading as futures were already in ‘Risk On’ mode coming into the day. The 17.7% increase in retail sales is the largest on record and it followed 3 months of declining retail sales. Weaker industrial production and capacity utilization did little to kill the mood as investors continued to go on a shopping spree – looking to pick up names that were unnecessarily dislocated in the most recent selloff created by the conflicting stories of a re-occurrence in new virus cases.

Investors/traders and algos are all trying to sort the latest headlines – was the resurging number of cases due to more testing, or was there now a new issue that would cause new concerns? Word that Beijing shut down parts of the city all over again as a sudden number of new cases caused concern set off all kinds of alarm bells – but, were they new cases? And what was with the salmon story? It all seems a bit sketchy – the virus was now swimming from Europe back to China? Really? It’s beginning to make no sense… and investors appeared to discount that story. Stocks moved higher as soon as the bell rang and remained higher until Fed Chair – Jay Powell began his testimony in front of the Senate Banking Committee. What was a buoyant mood – suddenly turned sour by 10:34 am as the teleconference began…

As Powell addressed the committee – he reminded them that the economy faces some ‘potentially significant long-term damage from higher unemployment and a wave of small business failures’ despite the turnaround in some macro data reports. He also reminded them that until we are sure that the virus is contained – no one should expect that a full and complete recovery can take root. All this despite the fact that both the central bank and the administration have introduced a range of emergency stimulus and lending programs to combat the effects of the virus. Remember – the most recent initiative announced on Monday as the market was coming under pressure allows for the FED to buy ‘qualified’ corporate bonds in the secondary market in an attempt to bring even more calm to the financial system. This raised all kinds of questions about what the next move would be – were stocks in the mix? Was the FED going to start buying individual stocks or the broader sectors via ETF purchases? Now, while this may sound ridiculous, who would have ever thought that the Fed would buy individual corporate bonds, either? I mean, at this point – you have to put everything on the table for consideration – and if you do that, what does that really say about the state of the union? Oh boy…

Look – the markets are proving to be fairly resilient – but they have been assisted by all the stimulus for sure… and in the end – the question remains – are stocks ahead of themselves? Are current valuations proper for what the eco data is telling us and what the FED is telling us? Are markets still vulnerable? Of course, they are – rising new cases – real or not – can create angst, even more stimulus is causing more concern, and the latest social unrest is only exacerbating underlying social/financial disparities accentuated by the virus. But this is what makes it exciting… and this is why it is important to have a plan in place. Talk to you advisor – stick to the plan and look for opportunities to tweak the portfolio in the event that the market suffers a larger pullback.

Overnight tensions between North and South Korea continued to simmer after ‘Chubby’ blew up a liaison office located right on the border and South Korea said that they ‘would no longer accept unreasonable behavior’ and this raises all kinds of geo-political concerns. And then tensions between China and India flared up once again along the border deep in the Himalayan mountains. Now – while none of this will price stocks in the long term – it can and will create angst in the short term – adding to the pressure already felt by the markets.

In Europe, markets are a bit higher as they seemingly ignore some of the latest warning signs by compartmentalizing the latest geo-political issues. In addition, the IMF (Int’l Monetary Fund) – is warning that the upcoming June World Economic Outlook Update is expected to show negative growth rates that are worse than had been expected but even this news is not causing markets to retreat… And the latest virus news indicates that while the virus is slowing in Europe – it is suddenly increasing in America… and that new cluster of cases in Beijing is not helping that argument at all. On the other hand, Oxford University is now reporting that Dexamethasone – an inexpensive and widely available steroid is saving lives in patients experiencing severe cases of covid19 – I am sure that we will hear more about this in the days ahead.  In early morning trade- the FTSE is +0.65%, the CAC 40 +0.52%, DAX + 0.41%, EUROSTOXX +0.33%, SPAIN -0.87% and ITALY -0.13%.

US futures are up… Dow futures +180 pts, S&P’s +19 pts, the Nasdaq is up 58 pts and the Russell is ahead by 14 pts. Jay Powell is facing another day of testimony – today in front of the House Financial services committee – expect more inane questions about why all the stimulus has not solved the problem yet… Why do we need more?  Etc… Look – the runup was mostly built upon the idea that the virus had run its course and that the country would re-open its gates in short order – but this part of the argument is now coming under pressure as that recent uptick in cases is challenging that argument.

Oil is down a little… 27 cts. At $38.12… Now unlike yesterday’s run up that was all about surging demand and declining production… this morning’s weakness is being credited to data that showed an increase in crude supplies and inventories. So – it only confirms that we are stuck in this yin-yang – surging demand and declining production one day, and then decreasing demand and oversupply the next day. Enough said… focus on the long term – and the long term suggests that as we wake up – demand will surge, period. We remain in the $36/$45 trading range…

S&P closed at 3124 as it looks like it wants to close the gap created last Thursday.  The market is attempting to find stability but expect it to remain volatile until we get more clarity on the virus and until we hear what else the FED will say to congress. This morning Jay Powell is in front of the House Financial Services Committee – as usual expect to be frustrated with the questions… remember – they are all created by senate staff members that have little to no understanding of fiscal/monetary policy and how it affects investor psyche. Investors will react to how and what Jay says vs. the questions he is asked. 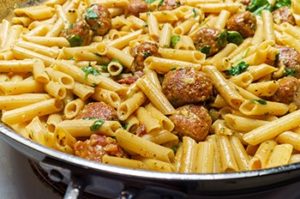 This is a great dish and you can make vegetarian by just eliminating the sausage.

Bring a large pot of salted water to a boil. Add the Mostacciolli and cook until aldente – 8 / 10 mins.

In a sauté pan – heat up some olive oil, crushed garlic and a sliced/chopped “red” onion. Sauté until the onion is soft and translucent. Now add the crumbled sweet sausage and sauté until browned.

Next – add a can of cannelloni beans – juice and all and stir to heat up… about 4 mins or so. Now add the arugula and stir. Arugula will wilt – no worries. Drain the pasta – saving a mugful of the pasta water… add the pasta directly to the sausage and beans and mix well. Add a handful of Parmegiana cheese and toss. If you need to add back some of the pasta water, now is the time to do it. The dish should not be soupy, but it needs to be moist.