Stocks had been all over the place during the overnight session from Wednesday to Thursday – leaving investors confused – asking if stocks were going to go up or down yesterday? And then at 8:30 am we got two significant economic reports – Initial and Continuing Jobless Claims. While the numbers were high – they were slightly less than expected – sending US futures from negative to positive suggesting that the algos liked what they saw. Now the numbers are shocking – but the market has been prepared for them. So when they came in better (think less than expected) – it was a reason to celebrate. Now for those of you unaware of the extent of job losses, yesterday’s Initial Jobless Claims report showed another 4.4 million Americans out of work (the expectation was 4.5 million) and Continuing Claims came in at 15.9 million (versus the expectation of 16.7 million) – completely wiping out all of the job gains seen since the GFC (Great Financial Crisis). And as talk of re-opening the US economy continues the assumption is that these numbers will begin to decrease. That is a good thing as we attempt to return to “normal” or should we say – the “new normal.”

When the bell rang – stocks shot higher -with the Dow rising 400 pts right out of the gate. Then at 9:45 – we got 2 more reports which speak more directly to the core of the economy – IHS Markit US Manufacturing PMI (Purchasing Managers Index) and IHS Markit US Services PMI. So here is what is important: These reports speak directly to the prevailing direction of economic trends in both manufacturing and services in this country. It is an influential monthly survey that summarizes whether market conditions are viewed as Expansionary, Neutral, or Contractionary by the very people who “purchase” goods and services. The neutral line is 50 – so a number greater than 50 is expansionary while a number below 50 is contractionary and the further from the 50 mark on either side details the extent of that expansion or contraction. Capisce? The expectations for this report were 35 and 30 respectively. (numbers not even seen during the GFC) – and the actual numbers were 36.9 and 27. So a mixed bag – but since the US economy is 70% a services economy the services PMI is keenly watched. Then, is when the surge in stocks began to fade, only to reverse as the media tried to re-focus the story on improving oil prices and better than expected earnings as well. So it was a push and pull all day long…

Then at 12:43 pm, news that a clinical trial of remdesivir – the Gilead drug rumored to be the answer to treating corona –  taking place in China, failed. (GILD disputes the results). The WHO (World Health Org) “inadvertently” published these results on their website before they did a peer review and analysis. That sent the algos into a tizzy causing the market to sell off swiftly. The S&P fell 50 pts while the Dow and Nasdaq fell 328 pts and 123 pts in TWO minutes only confirming how fast the tone can change and how deep it can cut before you even blink your eyes. And so the rest of the day the algos attempted to decipher the headlines causing the broader market to trade higher in an attempt to discount the negative news in that trial only to fail as the clock wound down to the 4 pm closing bell. By the end of the day the Dow closed +39 pts while the S&P lost 2, the Nasdaq gave up 1 and the Russell added 12 pts.

In yesterday’s note – I made this observation:

“The S&P closed at 2799 and is once again approaching its downtrending 50 DMA trendline at 2830.  Now it was here at the trendline that we found resistance on Monday so the question is: will that happen again? Will we rally up to, kiss it and then fail to pierce it? If we break through this level, then expect a test of the most recent high of 2850 – which coincidentally was where the trendline was when it failed on Monday.”

And guess what? The S&P surged up and through 2830 – and tested where? Yup – the high yesterday was 2844 or 6 pts off of where it failed on Monday before trading right back down to 2797. And this morning stocks around the world are lower as investors digest a fresh lot of economic data, more earnings and more details on the failure of remdesivir and what that means to combatting the virus. In London – the office of National Statistics reported that British Retail Sales had fallen at the fastest rate on record in March – and that’s a surprise? Earnings will continue to be in the headlines but the focus remains the virus; how to combat it, how to protect the world’s citizens and how to re-open the global economy. Vlad (Putin) is recognizing that the virus AND the unprecedented plunge in oil prices is about to smash his economy – had the CBR (Central Bank of Russia) cut interest rates by 50 bps – bringing them to 5.5%. Just FYI – Russia is confirming 65,000 cases (no deaths -laughable) and now realizes that this is a “very problematic” situation.

US futures are slightly higher – bucking the trend seen around the world but do not appear to be on fire at all. Currently Dow futures are up 70 pts, S&Ps are up 11, Nasdaq up 18 and the Russell up 7. Gilead coming out swinging, saying that the study reported yesterday was:

“…terminated early due to low enrollment leaving it underpowered to enable statistically meaningful conclusions. As such, the study results are inconclusive…”

Then Jimmy Cramer of CNBC fame, raises doubt over this result essentially saying that the China study itself was flawed, and we shouldn’t believe it and that we needed to wait until the American study is published by the University of Chicago – which is apparently conducting a much more rigorous test and this is once again fueling a move to the upside by the algos.

Earnings from AXP, FCX, CY, IRM, AMC, RTN, AEP, VZ and TPL are all expected before the opening. 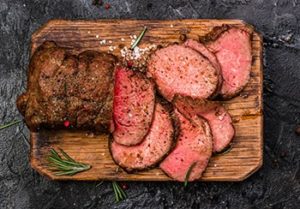 Get yourself a nice sirloin roast: 5/6 lbs. season with salt and let rest for 20 mins on the counter. While this is resting, slice fresh mushrooms, chop 2 large carrots, 2 celery ribs, 1 large onion, a can of low sodium beef broth and a can of tomato paste. Next select a nice bottle of red wine – today I feature an Australian Red: Penfold’s, a cabernet that is outstanding.

Season beef with s&p and sear it in a frying pan with Olive Oil making sure to brown on all sides even allowing a crust to form. When complete – place in a V rack in a roasting pan and place in a preheated 275-degree oven uncovered. Allow to cook for 2 1/2 to 3 hrs. or when ready according to the meat thermometer.

After putting the roast in the oven – return to the frying pan – as the chopped veggies to the oil and sauté until tender – 8 / 10 mins. Add tomato paste and mix, add 1/2 bottle of the red wine and stir – bring to boil and let the alcohol burn off a bit, 3 mins. Add the beef broth and simmer – stirring occasionally. do not let it dry out… if necessary – you can always add a bit more broth. After about 10 mins, taste to make sure you like it. If so – puree 1/2 this mixture and return to the sauté pan. turn off heat.

When beef is ready – take out of over and let it rest for 10 mins – covered in foil. Reheat the sauce. thinly slice the roast and arrange on plate – top with sauce.

I had this meal on Sat and served it mashed potatoes and sautéed peas – always include a large green salad. Finish off with a glass of a hearty red wine.